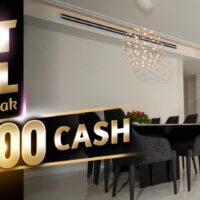 The Lucky Winner of The Early Bird “2021 TOYOTA HIGHLANDER” is Shimshon Gotfried!!!

MERON; Who did not hear of this revered and holy gravesite? Who does not know of the great sage Reb Shimon bar Yochai? Thousands upon thousands of people visit Meron on a weekly basis, and are elevated spiritually and see miraculous results in their day-to-day struggles. As many thousands tend to come in order to pour their hearts out and are in desperate quest of yeshuos, many others come to thank Rabi Shimon on the supernatural miracles they’ve witnessed in his great merit.

‘Hachnasas Orchim Rashb”i’ in Meron is the only hachnasas orchim in Meron, and is up and running for over 50 years, serving as a warm-spot for the thousands of visitors all year round, including Shabbos and Yomim Tovim, who are generously hosted and accommodated with hot dishes and drinks, all entirely free of any charge.

THIS IS THE WILL OF RASHB”I. As stated in many seforim, and as the holy Arizal was accustomed to doing. Exactly that, to serve food and drinks for the Meron guests, especially the sum of 18 liters of drinks is what Tzadikkim promised boundless yeshuos for all those involved, physically or monetarily.

‘Hachnasas Orchim Rashb”i’ also administers a full-fledged yeshiva of distinguished Mekubalim, located at the opening of Rashbi’s holy burial cave, as well as a Chatzos [mid-night] Kollel where the scholars learn the holy words of Torah written and taught by the holy Rabi Shimon. They constantly daven on behalf of their supporters and donors at the burial cave in which all prayers are answered according to our Gedolim.

Before, During and After the Terrible Tragedy

Just like all other years, this year too, Hachnasas Orchim of Meron accommodated tens of thousands of visitors who came to pour their hearts out by Rabi Shimon and to rejoice in his happiest day. And then tragedy struck us all very hard.

During these crucial moments of despair and uncertainty, when thousands were shut off from telecommunication service and were in total anguish, they found a warm place in our Hachnasas Orchim where they were able to have some sort of tranquility and state of mind enabling them to plan their future steps.

The first responders and medical personnel who have witnessed the most horrific scenes in their lifetime, were also comforted to some extent at our Hachnasas Orchim. Children looking for their fathers in the midst of the pandemonium were at least not hungry nor thirsty.

All the stranded families who were left abandoned in Meron without any method of transportation to their homes before Shabbos, were cordially invited to three full-fledged meals with the highest standards.

Being, t5aht we are the only Hachnasas Orchim in Meron, we feel a personal relationship to all those perished in the tragedy, and we sent out large packages of food to the families of the deceased and the wounded, in order to lighten their agonizing burden with at least something.